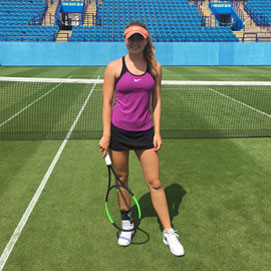 Sarah began playing tennis at the age of 4 and having been selected to compete in the Kent team for the U10s, she has been selected every year since for each age group.  Sarah has been county champion at U12, U14 & U16, in the ladies’ open event and has held a variety of doubles titles.  She additionally won the U14 Road to Wimbledon doubles tournament and was a semi-finalist in the singles event.  Sarah continues to compete both nationally and internationally with the aim of achieving a world ranking.  She began full time coaching in September 2014 and is currently a level 4 performance coach.  Sarah works with both juniors and adults and has some daytime availability for adult individual or group lessons.