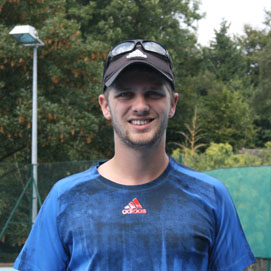 Howard started playing tennis at 8 years old and became involved in coaching aged 15.  After having completed A levels in Physical Education and Psychology, he began coaching full time at age 18.  He joined Sevenoaks Tennis Centre & LTC in January 2012, and is qualified as a Licensed LTA Level 3 coach.  He provides group coaching for adults and juniors, and in addition to this, has availability for individual adult coaching midweek, during the day.  As well as his work at Sevenoaks, Howard coaches at Chipstead LTC and heads up the coaching programme at Hildenborough LTC.  Howard also offers a racket stringing service.  He can be contacted about lessons or racket stringing by text or phone on the above number or by email on howard.g.phillips@gmail.com.