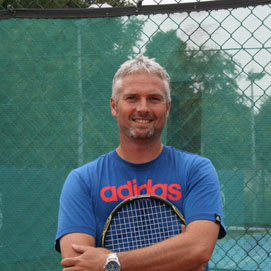 Max starting playing tennis at the age of 14.  Despite a later start, he played in the U18 county team, reached national ranking levels in both singles and doubles whilst at university and won a tennis scholarship to study in Texas.  Max began a career in coaching in 1997.  He is both a LTA Performance Coach and a Kent County Captain.  He has worked at Sevenoaks Tennis Centre & LTC for over 15 years, during which time he has worked with players from beginner level up to world ranked juniors.  In addition to his work with juniors, Max currently coaches many of the adult team players and has some availability for adult individual or group lessons midweek daytime.